Qatar to leave OPEC and set own oil and gas output

A Qatari liquefied natural gas (LNG) tanker ship is loaded up with LNG at Raslaffans Sea Port, northern Qatar. The tiny, energy-rich Arab nation of Qatar announced on Monday, it would withdraw from OPEC. ( Associated Press)

The tiny,energy-rich Arab nation of Qatar announced on Monday it will withdraw from OPEC in January,metting its aspirations to increase production outside of the cartel`s constraints and slighting the Saudis who are currently boycoting Doha.

The surprise announcement from Qatar's minister of state for energy affairs, Saad Sherida al-Kaabi, again throws into question the role of the cartel which had to turn to non-members to push through a production cut in 2016 after prices crashed below $30 US a barrel.

It also marks the first time a Mideast nation has left the cartel since its founding in 1960.

In a statement, al-Kaabi said Qatar, the world's largest exporter of liquified natural gas, planned to increase its exports from 77 million tons of gas per year to 110 million tons. He also said Qatar wants to raise its oil production.

"In light of such efforts and plans, and in our pursuit to strengthen Qatar's position as a reliable and trustworthy energy supplier across the globe, we had to take steps to review Qatar's role and contributions on the international energy scene," al-Kaabi said.

There was no immediate comment from Vienna-based Organization of Petroleum Exporting Countries, which is to meet this month and discuss possible production cuts. In November, Saudi Energy Minister Khalid al-Falih said OPEC and allied oil-producing countries will likely need to cut crude supplies, perhaps by as much as one million barrels of oil a day, to rebalance the market.

Qatar produces only some 600,000 barrels of crude oil a day, making it OPEC's 11th biggest producer. The loss of production, under two per cent of overall OPEC supply a day, won't greatly affect the cartel's position in the market. 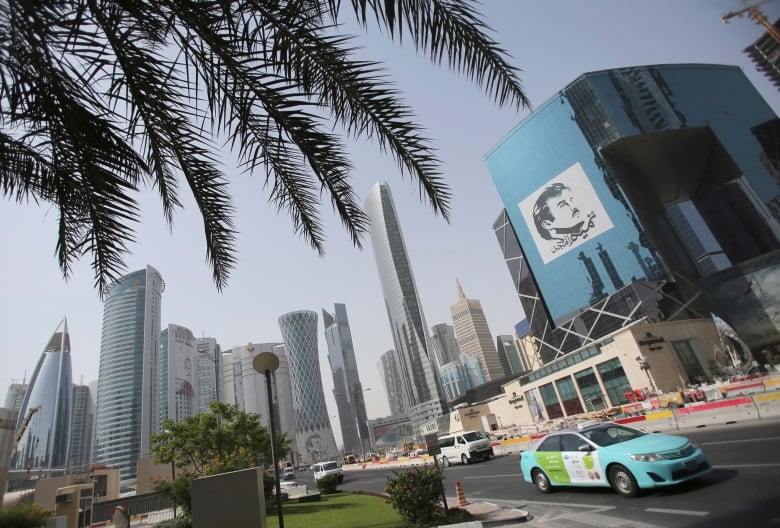 A taxi passes by a building with an image of emir of Qatar, Sheikh Tamim bin Hamad Al Thani, in Doha. Qatar wants to set its own energy production targets, independent of OPEC. (Associated Press)

Anas Alhajji, an oil analyst, said Qatar's decision "has no impact on the market either way whether they're in or they're out."

"The cost for them is higher than the benefit" of remaining in OPEC, Alhajji said. "This is just like shutting down a losing business."

"This organization has become useless and adds nothing to us," Sheikh Hamad wrote on Twitter. "They are used only for purposes that are detrimental to our national interest."

Qatar, a country of 2.6 million people where citizens make up just 10 per cent of the population, discovered its offshore North Field gas deposit in 1971, the same year it became independent.

It took years for engineers to discover the field's vast reserves, which shot Qatar to No. 3 in world rankings, behind Russia and Iran, with which it shares the North Field. It's also made the country fantastically wealthy, sparking its successful bid for the 2022 FIFA World Cup.

Qatar's wealth also has seen it take on a larger importance in international politics. Its political stances, often supporting Islamists, have drawn the ire of its neighbours, particularly Saudi Arabia, OPEC's largest exporter.

They say the crisis stems from Qatar's support for extremist groups in the region, charges denied by Doha. The four nations have also pointed to Qatar's close relationship with Iran, with which it shares a massive offshore gas field. Qatar restored full diplomatic ties to Iran amid the dispute.

OPEC was formed in 1960 as a reaction to Western domination of the oil industry.

Qatar was the first nation outside of its founding members to join the cartel, entering its ranks in 1961. Qatar is a nation about twice the size of Prince Edward Island, which juts out from the Arabian Peninsula into the Persian Gulf. It hosts the al-Udeid Air Base, the home of the forward headquarters of the U.S. military's Central Command and some 10,000 American troops.

OPEC will have 14 members after Qatar leaves

With Qatar, OPEC had 15 members, including Algeria, Angola, Congo, Ecuador, Equatorial Guinea, Gabon, Iran, Iraq, Kuwait, Libya, Nigeria, Saudi Arabia, the United Arab Emirates and Venezuela. OPEC nations like Ecuador, Gabon and Indonesia have either withdrawn or suspended their membership in the past, only later to rejoin. Qatar could potentially do the same.

OPEC sets production targets for its members in an effort to control the price of oil available on the global market. However in recent years, oil-producing nations outside of the group like the United States and Russia have played a larger role in affecting prices.

Among its members, Saudi Arabia is by far its largest oil exporter, hitting a record high in November of over 11 million barrels of oil a day.

President Donald Trump repeatedly has criticized both OPEC and American ally Saudi Arabia over rising oil prices in recent weeks, demanding a production hike to drive down U.S. gasoline prices. That rising supply, coupled with the Trump administration allowing many countries to continue to import Iranian oil despite his targeting of Tehran with sanctions, has seen global prices drop.

Benchmark Brent Crude for instance for reached over $85 US a barrel in early October,only to drop sharply in the time since.It was $61.3 a barrel in trading Monday,while the benchmark North American contract traded for $52.6 USD